Tuesday dawned – 48 hours in Moutiers hospital and I was beginning to get used to the routine. I had requested a vegetarian dinner and was given 6 hard boiled eggs – given all the codiene I had consumed I was not sure that this would help my bowels!!

Part of the routine was the 8am ward round and I got myself up, dressed and even managed to put on make up with my left hand to prove to the hospital staff that I was fit enough to travel. Bearing in mind this is all with one arm strapped to my front I was pleased with my achievement.

The consultant came round and gave me the all clear – a certificate of ‘ fit to fly’. I was delighted. George arrived at 8.15am and told me that the insurance company were phoning the hospital at 9am to speak to the consultant. So, we sat and waited by the vending machine which was labelled ‘ restaurant’ as we didn’t want to disturb the other occupant in my room – a headmistress who had broken her ankle and was having pins put in.

By 11am we had made about 20 phone calls to the insurance company whilst trying to co-ordinate the hospital staff in Moutiers. In the background we could hear ‘broken back’ man’s wife yelling down the phone to her insurance ‘ this is bloody ridiculous’ – I knew how she felt.

At midday my mobile rang – hooray – the insurance company – news at last! But not the news I wanted. Apparently, in their wisdom they had decided that I was not able to fly without medical support, which would take a minimum of four days to arrange. As we were coming up to Easter weekend I could see me not getting home until after Easter. I put my boots on, and told George I was leaving the hospital with or without his help.

George was a star – he booked me on an Easy jet flight from Lyon with my mother that evening and  got agreement from the insurance that if anything happened to me they would not be liable yet they would pay for the flight. I got on the phone to my Dad who was still in the ski resort with our kids and asked him to bring Mum to the hospital.

I told the nurse I was discharging myself, whilst she wasn’t delighted I think she was glad there was one less person to worry about, so I hunted down the admin to settle the final bill. The EHIC* card worked like magic and settled 80% of the bill, and despite following the ‘three steps’ religiously the insurance company had not given the OK for the remainder so I paid it on my credit card on the understanding that I would be reimbursed later.

At 3pm we made it out of the hospital and racing down the motorway to Lyon for a 6:50pm flight. At the airport the GP phoned me so I gave her an update – she told me to go straight home and she would arrange an outpatients appointment for me in the morning.

When I got home I cried tears of joy – I was so pleased to be back. Little did I know that the battle had only just begun…..

This is the link to apply for an EHIC – a must if travelling in Europe. Beware bogus sites which may charge you – I found one which charged £49!

I woke up in Moutiers hospital ready for my shoulder surgery. Unfortunately it wasn’t as straight forward as I had expected. Having been prepped for theatre the surgeon came into the room – in his late fifties he said he didn’t speak a word of english. So, surrounded by nurses who were doing their best to translate the words I didn’t understand, he explained that the operation was too complex for him as the fracture was ‘tres sévère’, and that the bone was so badly broken he thought I would need a shoulder replacement and that I should go home. As long as I had the operation in a couple of days it would be fine.

No  sooner had he left the room than the hospital administrator arrived with a sheet of paper – ‘follow these three steps with your insurance company – and start now’ he said as he presented me with a bill for €1300!

Despite the IV which was pumping me full of painkillers I was in pain and incredibly upset by the news I had so I called my husband, George, who came to the hospital to help me make arrangements.

Well, if only it was that simple. It became apparent that the ward was 90% full of Brits who had been on skiing holiday who were trying to make their way home. One poor man had broken his back and although he was able to walk in a brace had been stuck there 10 days while the insurance tried to sort out transport!

There followed a whole day of phone calls, faxs,forms and by the end of the day we had got nowhere. I was so upset. One of the key problems was that the insurance company would send their form over in english, the hospital would fill in a different french form and then we would have to wait for the form to be translated. I was beginning to see how people were stuck in the hospital for so long.

One of the complicating factors was the IV – so I asked the nurse to take it down and give me oral medication – which I supplemented with the medication that George had got from the pharmacy in the mountains.

While George battled it out with the insurance, I tried to sort out a hospital admission in the UK – again no mean feat as I was not in the UK system, and I believed up against the clock.

I contacted my GP who was simply brilliant. That night, about 9:30pm French time she called me back and had a long chat with me about how I was, what my arm looked like and what I had been told. She had contacted a specialist shoulder surgeon in my home town who had told her there was no hurry to have the shoulder operated on, and that he would see me when I returned. I was a little relieved but not wholly as neither the UK surgeon nor my GP had seen the x rays.

I went to sleep hopeful that I would get home tomorrow….

I went skiing with my family in March. Now I know, possibly more than others, the dangers of skiing. During our annual family holidays my mother has dislocated a shoulder, torn a cruciate ligament, broken her back and broken her arm. My brother dislocated his shoulder so many times he had to have surgery; he also tore all the ligaments in one knee and has had multiple surgeries to his leg. My daughter hit a pole and had stitches in her eyebrow and my son and my husband have both broken arms.

When it is written like this it does make me wonder why on earth we keep going. Well, the simple answer is it is a fabulous family holiday, we love the mountains, the exercise, the adventure, the food….when it is good it is amazing! 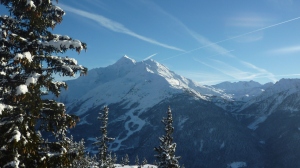 This year wasn’t so good. We arrived on Saturday and by Sunday night I was in hospital. I was involved in a collision with another skier and knew instantly I had hurt my shoulder. Having made both husband and son ski on broken arms I decided to ‘man up’ and ski down to seek help. 400mg of ibuprofen, 4 ski lifts and a lot of swearing later I made it back to our appartment.

As soon as I took my jacket off I knew I was in trouble as my arm was so swollen so we went and found the local doctor. Before he x rayed it, he told me my arm was broken, however, when he saw the x ray he went pale and told me I would need an operation as there were multiple fractures.

He kindly took my husband to one side, put an arm around him and presented him with a bill for €350 and a prescription for painkillers and a sling to take to the pharmacy around the corner.

While my husband went and collected the painkillers and sling ( a further €160) the doctor called an ambulance for me. The ambulance staff were very kind to me as we went down the mountain to the hospital. On the journey they presented me with  the bill for the trip – €180. As for some unknown reason my debit card wouldn’t work they stopped at a cash point and got the cash out to pay for the trip! By this point I really appreciated our NHS!

At the hospital I had to fill in numerous forms, tricky as it was my dominant arm that was injured and they were all naturally in French. I had an MRI and further X ray and was told I would have an operation in the morning. I was reassured that this was a specialist orthopaedic hospital and that they were used to doing this type of operation. As it was all in French the medical terms were testing my language skills but I went up to the ward confident that I was in good hands……..